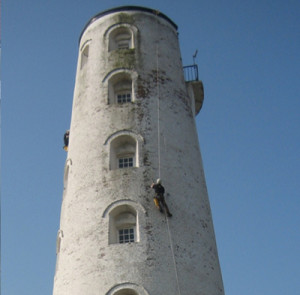 Last month The Friends of Leasowe Lighthouse appointed JDB to carry out a final inspection before they assume full responsibility for the building from Wirral Borough Council.

Our visit was almost 6 years to the day since we undertook a full structural survey, which included abseiling down the side of the building.

Leasowe Lighthouse was built in 1763 by Liverpool Corporation’s Docks Committee (the forerunner of the Mersey Docks and Harbour Board) and is the oldest brick-built lighthouse in Britain.

According to local tradition its foundations were built on bales of cotton from a nearby shipwreck. William Hutchinson the Liverpool born mariner, privateer and inventor installed what is thought to have been the world’s first parabolic reflector in a lighthouse.

The lighthouse was one of four lights on the North Wirral foreshore, the others being two at Hoylake and another – a lower light – at Leasowe. The latter was soon destroyed by the sea and was replaced by a lighthouse on Bidston Hill in 1771.

The lighthouse was operational until 14 July 1908, with the only known female lighthouse keeper in those days, a Mrs. Williams.

It then became a tearoom for a period, but was unused before 1989, since when it has been the base for the ranger service of the North Wirral Coastal Park, The Friends of Leasowe Lighthouse and Wirral and District Amateur Radio Club. The building houses a visitor centre and also holds charity abseil events.

Find out more about this local Merseyside landmark at www.leasowelighthouse.co.uk.

Timber and Damp Survey. What is it?

Timber and Damp Survey. What is it?